I don’t want to disdain the general public. I really don’t. I want to be a kinder, gentler version of myself. But people are generally so irritating and lacking in both situational awareness and common courtesy that I can’t help but want to move to a log cabin in Alaska and cloister myself from society with nothing to keep me company but books and hot chocolate.

I went down to the office cafeteria for lunch today. That was my first mistake. I should have known better than to leave the safety and comfort of my solitary cubicle.

I got into the salad bar line behind an elderly Chinese man who apparently thinks the best way to communicate what you want on your salad is to stick your fingers into each of the topping choices as you point to them. You know those slanted, clear glass walls that are supposed to act as germ barriers in buffet lines? Well the one in our cafe has about a 12″ gap along the bottom – just enough for Mr. “Free-E.coli-For-Everyone!” to stretch his hand underneath to point very specifically at which vegetable he wants added to his salad next. 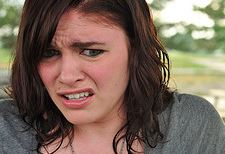 While I was trying not to make this face at his dandruff covered fingernails in my cucumber slices, the girl behind me kept bumping into me. At first, I thought she must be looking down at her cell phone and not paying attention to where she was going. But the fourth time her hand grazed my buttocks, I turned around and discovered that there was no cell phone; she’s just one of those people whose “personal space bubble” is essentially nonexistent. 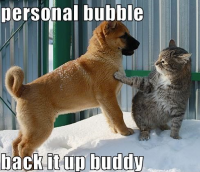 It’s true that I have a very firm, round derriere, but that is not an open invitation to cop a feel. So the fifth time she bumped into me and murmured, “Sorry,” I just about turned around and said, “Don’t be sorry. Either back it up or man up and ask for my number.”

I joke about her trying to touch me intentionally, but the sad part is, she wasn’t actually that sly. She was just severely impaired in regard to spacial relations.

I finally got to the cash register, paid an exorbitant amount for my dressing-saturated salad, and escaped back to my desk after being run into by another oblivious man and sharing the elevator with a woman who spoke so loudly that she caused my ears physical pain.

8 thoughts on “Adventures of an Introvert”