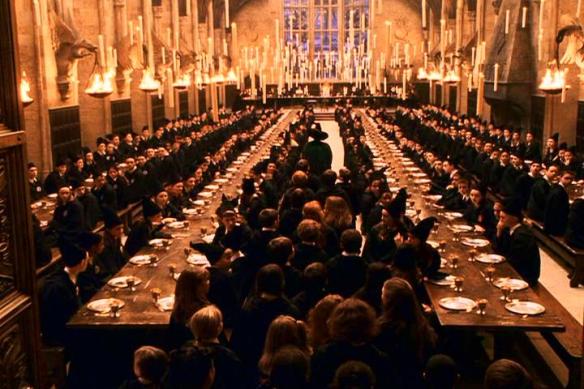 Have you ever had an amazing, wonderful, magical experience that left you giddy with delight until you realized that there was some green grass of other opportunity knocking that came and ripped your budding happiness out by the roots, leaving it dangling helplessly as it withered and died, all the while looking forlornly at the blindingly vibrant greenness of the grass on the other side of the fence?

Well guess what, Ashley, my magnificent, prophetic sunflower? Now you can.

And by “you”, I mean not you, because we already used up all of our saved vacation time and frequent flyer miles and milk money and hopes and dreams on what once was considered a stupendous vacation that now is rendered less stupendous by the wicked, Voldemort-inspired knowledge that the Great Hall was indeed made for eating and can now be utilized for just such a purpose outside the confines of the magical, cinematic world of Harry Potter. But it can only be utilized for such a purpose by the happy few who procrastinated in their visit to the WB Harry Potter studio.

These fakers aren’t even real fans. They could have gone on the WB Studio Tour earlier, but no! They had excuses like having to work and wash their hair and put their Muggle kids through college. Hello! It’s college, not Hogwarts. You parents need to sort out your priorities! And now, since they are procrastinator fake fans who felt the need to be responsible and deal with “real life” before caving to their childhood fantasies of paying thousands of dollars to fly halfway around the world with bright, shiny stars in their eyes as they picked out their robes and their wands and got their photos taken at Platform 9 3/4 — now these responsible adults get to go to the Great Hall at a time when it will be open for a Christmas feast!

They will eat flaming puddings with fires that dance like a phoenix’s tail feather. They will feast on hams studded with cherries so sweet they will put the house-elves’ treacle tarts to shame. They will guzzle butterbeer so free-flowing that Hagrid might end up with another dragon egg. And Ron may even show up in his latest Christmas sweater hand-knitted with love by Mrs. Weasley (not that anyone wants to see that eyesore).

Meanwhile, Ashley and I will be feasting on our tears – our salty, bitter tears of crushed dreams and missed opportunities.

10 thoughts on “Feasting on Bitterness”