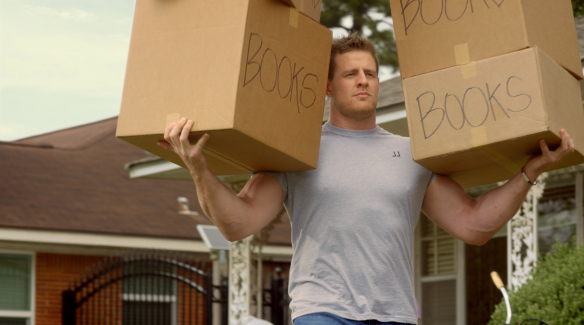 About a month ago, I moved to a new apartment to be closer to where I’ll be teaching this fall. It’s a nice place, built like a townhouse with a garage on the bottom level and my living area stacked directly above it on the second floor. I have granite countertops and a patio, and – because it’s so far outside of town – this awesome unit costs $400/month less than my last place.

Seth helped to move me in. Actually, he insisted on it, pressuring me to let him be a good boyfriend rather than hiring movers. My compromise was to let him move all of the boxes but hire movers to move the furniture. That way, Seth would get to do the manual labor he loves so much (think country boy stuck in the city), and I would still have an intact boyfriend (and furniture) when I finished getting moved.

I made the mistake of giving Seth the keys to both my old and new apartments while I ran to a baby shower I was hosting. And when I got to my new place later that afternoon, I discovered that Seth had decided to move my couch by himself when I wasn’t there. Something about proving to me that I really shouldn’t have hired movers… That’s what I get for dating a manly man.

Anyway, while we were unloading boxes from the back of his pick-up truck, we both stopped short at the sight of a familiar face across the walkway from my garage. My new neighbor is kumquat Joe.