Why are INTJs always the “bad guy”? Although they may wear different masks, capes, motivations and agendas, some of the best loved and most feared villains of fiction all share the same dark, twisted core: the INTJ personality type. [Imagine dramatic “dun-dun-dun” sound effect here]

Magneto, Voldemort, Moriarty, Hannibal Lechter, Tywin Lannister, Emperor Palpatine, and Rumplestiltskin are all Myers Briggs INTJs and – let’s be honest – pretty fantastic villains. Because of their intuition and introverted feeling coupled with extraverted thinking, INTJs tend to process their deep, intense emotions privately while only sharing their logical, rational thinking with the rest of the world. The result is that they are frequently misunderstood – a misfortune that is enough to drive anyone to the dark side!

Since they rarely let people in to their inner world of deep feeling, INTJs can come off as “cold, calculating masterminds” and “are defined by their tendency to move through life as though it were a giant chess board… always assessing new tactics, strategies and contingency plans, constantly outmaneuvering their peers in order to maintain control of a situation while maximizing their freedom to move about.” It’s no wonder authors love to use us as their antagonists!

As an INTJ myself, I can confirm that we are intensely logical, rational and cerebral. I am a strategist, and I truly do view the world as a chessboard. But I also feel everything, deeply and personally. In my experience, INTJs manage to simultaneously be the most hopeless of idealists and the bitterest of cynics.

We have the capacity to be some of the most vicious, cut-throat villains because of our brilliant minds, flawless logic and masterful strategizing. But simply having the raw capacity to be bad-ass villains isn’t enough to drive us over the edge to the dark side. Just because we are capable of both envisioning and executing the perfect crime doesn’t mean that we are inherently evil. I hold to the fact that the reason most villains are depicted as the INTJ type – and the reason so many of us “go bad” – is that we are widely misunderstood by society at large.

Both authors and the characters in their story lines are confounded by INTJs. We are the second rarest personality type in general and the rarest among females. We come off as stoic and emotionless since we tend to keep our deep, intense feelings beneath the surface. We do this either because a) selfishly, we realize that showing our emotions can result in vulnerability, or b) selflessly, we know others couldn’t handle the intensity of our emotions.

In X-Men, Magneto originally wanted to use his powers for good. He was a hurt little boy in Holocaust Europe whose parents were murdered by anti-mutant humans. In Harry Potter, Voldemort was an orphaned boy who was frequently picked on by bullies and therefore, eventually become one himself. In Once Upon a Time, Rumplestiltskin was rejected by his own father in favor of power and youth. All three suffered pain, loss and rejection, and that poisonous, damaging concoction resulted in their turning to the dark side.

Note that the few famous “good” INTJ characters were created by authors who were either INTJs themselves or close friends with a known INTJ – for instance, Mr. Darcy by Jane Austen and Gandalf by Tolkein (friend of C.S. Lewis).

INTJs are inherently influential and tend to rise to positions of power. Think of the influence Mr. Darcy had – quietly; discretely – over the Bennet family’s collective well being. And imagine how differently the Lord of the Rings trilogy would have turned out if Gandalf had “gone bad.”

What is my point? Be nice to INTJs. Actually, be nice to people in general. Within all of us, we hold the power to use our gifts and talents for good or evil. Help INTJs choose the Light by keeping from giving us a reason to move toward the Darkness.

Basically: Hug an INTJ and save the universe.

The world is more beautiful from the back of a motorcycle.

This weekend, I visited my parents, and my dad took me for a ride on the back of his bike. With the wind in my face and the sun on my skin, colors seemed brighter and life seemed simpler. With my arms around my daddy, surrounded by a cocoon of white noise, people seemed kinder and more engaging.

That afternoon, I got a glimpse into the brotherhood of bikers. Every time we passed another motorcycle, a subtle acknowledgment took place between my dad and the other rider. I watched my dad nod to (and receive a nod in return from) everyone from salt-and-pepper-bearded grandpas to young bucks with long blonde hair and cigarettes hanging out of their mouths. There was a unity and unilateral respect that created in me a sense of peace and calm. All seemed right with the world.

Of course, then I dismounted and remembered that I was wearing my 6’1″ father’s Kevlar jeans rolled up five times and cinched tightly at the waist with an elastic belt, along with a plated leather jacket with sleeves that reached six inches past where my arms stopped. Okay, so maybe everyone else’s view wasn’t as idyllic as mine, but questionable wardrobe aside, it was a wonderful afternoon exploring another world with my daddy. In fact, it reminded me of another World with another Daddy, where another Brotherhood will live in perfect unity for all eternity.

“If I find in myself a desire which no experience in this world can satisfy, the most probable explanation is that I was made for another world.”  -CS Lewis 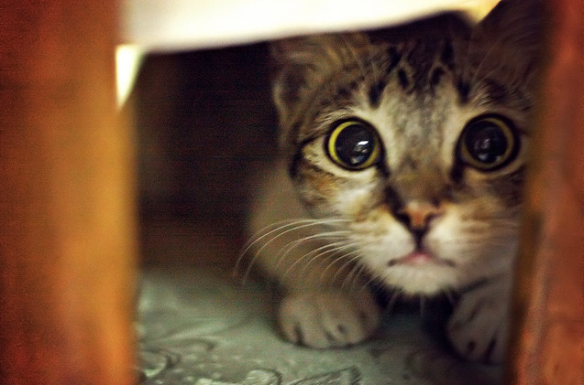 I recently fostered a kitten for the weekend (and yes, I do realize that I am beginning the slow descent toward “cat lady” status). When I brought little Anya home in the afternoon, she sat and snuggled in my lap while I petted her and hand-fed her treats. But as night closed in and I started a load of laundry (making lots of loud, scary noises), Anya ran behind the couch and wouldn’t come out, even to eat.

I wanted to hold her and comfort her, but all she saw was a big, scary new place with a stranger holding her captive.

I wanted to feed her and let her know that I would take care of her. But her food bowl was out in the open, surrounded by frightening new sounds and shadows.

I wanted to let her know how much she was loved, but every time I tried to take her in my arms, she ran and hid in deeper darkness.

What I learned from my scaredy cat over the past weekend is what my life must look like from God’s perspective. He has stripped me of once-close friends, two different ex-fiances, various phenomenal opportunities and worldly accomplishments, and so many other things that I desperately wanted and believed were desirable. But He sees the bigger picture – the grand, overarching, eternal perspective – and is always working for my good and His glory.

A lot of Christians pick a “life verse” – a bible verse that speaks to them and is representative of their life. Mine is rather unconventional:

“I will punish her for all those times when… she put on her earrings and jewels and went out to look for her lovers but forgot all about me,’ says the Lord. ‘But then I will win her back once again. I will lead her into the desert and speak tenderly to her there. I will return her vineyards to her and transform the Valley of Trouble into a gateway of hope. She will give herself to me there, as she did long ago when when she was young, when I freed her from her captivity.” -Hosea 2:13-15

When God leads me into the desert and strips away all the people and things that normally comfort me or provide me with a sense of identity, He is really doing what I was doing for Anya when I physically pried her from behind the washing machine, where she had found comfort with dust bunnies, and placed her gently on her plush bed, with freshly opened food waiting to be eaten by her rumbly tumbly.

“It would seem that Our Lord finds our desires not too strong, but too weak. We are half-hearted creatures, fooling about with drink and sex and ambition when infinite joy is offered us, like an ignorant child who wants to go on making mud pies in a slum because he cannot imagine what is meant by the offer of a holiday at the sea. We are far too easily pleased.”