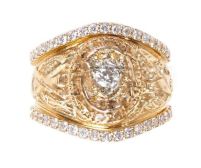 Well, he didn’t ask, if you know what I mean. But he asked.

Seth and I were talking about ring wraps for class rings because his sister has one, and I’ve been thinking about getting one. It was an innocent enough conversation – he was just telling me about the process of having the wrap uniquely sized for the class ring.

And then he asked my ring size.

It was of course in the context of talking about class rings, but y’all. Not only did Seth ask for my ring size, but he did it smoothly and then moved us along in the conversation to something else.

I’m choosing not to read too much into it. I don’t want to be that girl. It probably doesn’t mean anything. But it was kind of nice to be asked all the same. And now he has that information… you know… should he ever need it in the future… 😉