Sunday was our planned day trip to Versailles, so Rachel and I got up early and started our morning at Kozy, a breakfast cafe she’d found on Yelp. It was unremarkable and fairly westernized, with hipster chalkboard menus hung on the walls and written entirely in English. Regardless, any morning begun with a latte and chocolate croissant is a good morning!

We finished breakfast, walked to the Metro, bought our RER C tickets and got on the train for the anticipated hour-long ride. At the Javel stop, we were surprised to spot the original Statue of Liberty out the window. Pretty cool. 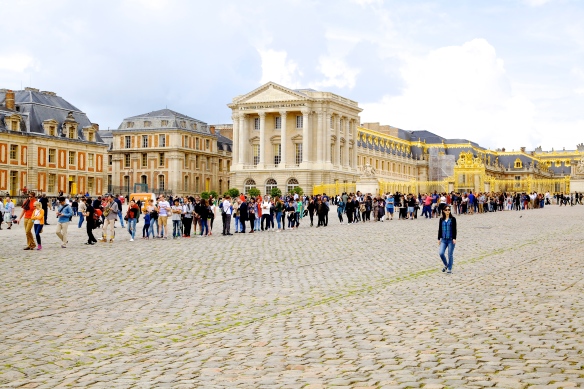 Once at Versailles, we found it to be beautiful but crowded. Our Paris Museum Passes were supposed to gain us entrance to the Palace and Gardens, but at the gate to the gardens, we were told we had to buy an additional ticket for entry since the water show would be held later that evening. I argued with the attendant that their website said water shows were only on Saturdays (it was Sunday), and anyway, that day’s show was at 8:30 PM and it was only 10:00 AM. We would be long gone by the time the water show started.

The ticket puncher wouldn’t budge, so Rachel and I went to the nearby Versailles Cafe to burn off some steam. But the line was out the door. So we went to the Versailles Laduree. They would only sell a minimum of six macaroons at a time; customers had to buy an entire box at once. Beaten down, we got in line for the Palace. Over an hour later, we made it inside, where we waited in yet another line to go through security.

The Palace was ornate but, in my opinion, not worth waiting for. Even the Hall of Mirrors – the entire reason I wanted to visit Versailles – was so full of people that the effect of the potential majesty was lost. The grandeur of the famous glass and crystal hall was diminished by all the madding crowds.

I also made the observation that all the paintings were of wars, French nobility or Greek mythology. One of the rooms is even called the Apollo room, but there is nothing remotely biblical throughout the Versailles Palace, at least not that I could see. I found that curious, considering how prominent biblical paintings and sculptures are throughout the rest of Europe, regardless of what the current inhabitants believe.

Ready to leave Versailles the instant the tour was over, Rachel and I took the train back into town and had lunch on Rue Cler. I ordered a Cobb Salad from Cafe Central; then we both got Nutella ice cream cones, which we took to a nearby park where little French children were playing, climbing trees and splashing water on each other from the fountainhead. It was interesting watching the French children play; they were very adventurous and active (and frequently without pants…?). Although we were in the midst of Paris, they acted like rural kids would in the States.

We continued on to the grassy area around Les Invalides, where I laid in the grass for a while before putting in earbuds and walking around the park, quietly singing worship music over the people there. I felt the void of having missed my church community that morning, and I longed for God to be praised in this place.

It was a beautiful day – sunny and 75 – so Rachel and I walked to Place de la Concorde; then through the Carrousel Garden and Tuileries Garden. We made it back to the greenery around the Louvre, where we were joined by Thomas and sat talking for a while before heading home to our Airbnb. As before, the Metro skipped over our Passy stop (perhaps it only stops at certain stations after a certain hour of the evening?), so we again walked home from Trocadero, rewarding ourselves with much-needed hot showers after climbing the 127 steps to our shared room. And then? Sweet sleep.

View from our Airbnb

After a long day of travel, Rachel and I were finally just one Metro stop away from our Airbnb when our RER turned a corner and there, in the break in the buildings, was the Eiffel Tower. “Wow, look at that!” I breathed, pointing at the massive structure. Rachel gave voice to the exact words in my head: “It’s bigger than I expected.”

We exited the Metro via an escalator leading us outside, where we got our first breath of French air. Sunlight filtered through the trees that smelled like jasmine, and birds chirped happily nearby. It was perfection.

We found our Airbnb, dropped off our luggage and ventured out into the city. After getting caught in our first French rainstorm and having our first cup of French coffee, Rachel and I entered the beautiful gardens of Musee d’Rodin. The lush gardens were shaded by trees dotted with rose bushes, making our walk cool, sunny and fragrant. 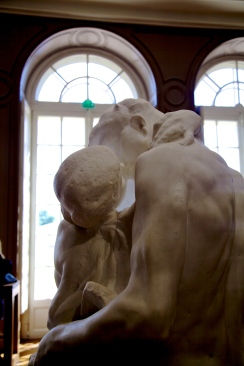 After walking around the outdoor paths and discovering “The Thinker”, we made our way inside where we found “The Kiss”. It is a breathtaking sculpture – possibly my favorite ever – because the intimate pose is both passionate and sweet. In my experience, it is hard to find both, but it is a love worth waiting for – and one that models the love that God has for us all. His love is strong.

Rachel and I enjoyed a chocolate-filled afternoon, stopping at both the quaint Jean-Charles Rochoux and the swanky Patrick Roger, as well as getting our first chocolate croissants from a chain called Paul. I saved some of my chocolates (hazelnut dark chocolate and rose dark chocolate) to savor while we sat in the grass at a small park, enjoying the sunshine.

For dinner, we ate at a restaurant I’d found on Yelp: Au Pied du Fouet. I ordered the canard (duck), and it was delicious, although I felt self-conscious because the friendly chef stood at the door to the kitchen watching me eat.

Rachel and I ended every day by climbing seven flights of stairs (127 steps. I counted). Then we rewarded ourselves with a hot shower in our plastic porta-shower and then… sleep!

The best part about ranking Houston’s best chocolate croissants? The requirement to eat said croissants. Or so I thought before consuming my fifth buttery, chocolate-filled pastry in a much-too-short three hour timeframe.

Ashley and I were recently in Houston, dubbed the “Fattest City in America” in 2001, 2002, 2003 and, more recently, 2012 by Men’s Health Magazine. So what did we do to celebrate our time in this city of obesity? We decided to research coffee shops claiming Houston’s best chocolate croissants and rank them for ourselves.

Ashley and I had ten coffee shops on our list. After our third stop, we realized that we had been far too ambitious in anticipating that we would be capable of eating ten croissants in one morning. Or even in one full day. Or over the course of an entire weekend.

In fact, I’m not quite sure how I’m typing this right now. I think I should be in a sugar and calorie-induced coma for the next month. Chocolate-filled croissants were not created to be consumed in such large quantities. I now realize that chocolate croissants are kind of like alcohol; for every one you eat, you need to drink a glass of water to help filtrate your system and prevent hangover. Sugar hangover.

Having never actually had a hangover myself, I’m not entirely sure what it feels like, but I imagine it’s sort of like what I’m experiencing right now: a lethargy and delirium that has me wondering if I will ever eat again. Or stand again. Or fit in my pants again. Or even desire to ever put on pants again, because that would require moving.

Good thing we only ate five and not the originally planned ten chocolate croissants. Or else  we MIGHT BE DEAD. In any case, so that you lovely readers don’t have to suffer as Ashley and I suffered, here is our review of the Top Five Chocolate Croissants in Houston:

Earlier this year, Houston Eater named Common Bond one of the up-and-coming coffee shops of the city’s hip “inner loop”. So Ashley and I had high hopes for their chocolate croissants – especially when we saw that they were roughly the size of a small house cat. Seriously. These things are gigantic.

Unfortunately upon tasting, I found my croissant to be dry and brittle, and – although it looked beautifully golden brown – on the whole, the pastry tasted decidedly burnt. It also was not filled with enough chocolate to make up for the seemingly endless mass of breading. It would seem Common Bond emphasizes quantity to make up for their lack of quality. 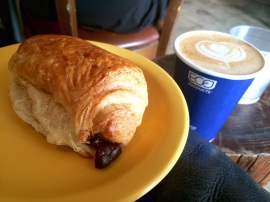 Although Boomtown is unquestionably the best hole-in-the-wall coffee shop in Houston (their Milk & Honey is the best latte I’ve ever had in my life), sadly, they need to stick to making coffee and leave pastry-making to the cafes in the top three.

The croissant texture was perfect – soft and flaky – but it was too buttery and had an unfortunate artificial taste. The chocolate had tinges of something akin to sickly sweet raspberry flavoring that was both unexpected and unwelcome. As amazing as Boomtown’s coffee is, I was disappointed at their pastry showing.

Side note: Kind of ironic that the one place with “croissant” in the name didn’t actually serve croissants…

This little gem of a cafe used to be a marketplace for local farmers and artisans to sell their wares, but Revival Market has since grown into a full-fledged cafe with seating and a farm-to-table menu for breakfast, lunch and dinner.

Let’s not do that math.