Not so in the mind of my Category Manager.

At the end of last year in my year-end review, I was given a ranking of “performs below average”. The reason given was that I don’t ask enough questions. My Category Manager (who serves as something of a “dotted-line manager” in our matrix organizational structure) shared with my boss that she has a lot more projects she needs me to take on, but she doesn’t feel comfortable giving them to me because she thinks I can’t even handle what I have going on right now.

I come in at 8am and leave at 4pm every day, after taking an hour lunch break. I am bored out of my mind, and the work hours I keep speak to that fact. But her perception is that I am overwhelmed and don’t understand anything – that I am incompetent – because I don’t ask her a lot of questions. I guess it never occurred to her that I don’t ask questions because I don’t need her answers. I have things handled.

But she is a control freak who needs to feel needed. So my lack of question-asking leads her to feel like she’s not in control, which somehow makes her believe that I am incompetent.

In our 8:30pm conference call on Wednesday night (that’s right; we have weekly night calls), she made an off-hand comment in front of the team that she would like me to read up more about our SAP HANA contract to ensure I am able to add value during a benchmark study taking place next month. Irritated with her lack of confidence in me and annoyed by the scheduling of yet another meaningless hour-and-a-half-long call, I decided I’d had enough of her condescension.

“I know it’s your perception that I’m incompetent and clueless, and you want me to read more legal documentation and ask you more questions,” I began, “But I feel like I have a pretty good handle on SAP HANA. I understand our RBU structure and the fact that we are in the process of migrating from Application-Based to Dynamic HANA. I understand the pros and cons of our options, and I know the breakdown of our RBUs based on Hardware, Software, Storage and our Data Centers. I recognize both the fixed and variable costs; which ones are consumption based versus a fixed fee. I believe I am able to speak intelligently in the benchmarking sessions, so don’t think that just because you don’t hear me show off about my knowledge doesn’t mean that I don’t know what’s going on.”

There was stunned silence on the phone line for a moment; then she moved on to another topic, but she brought up the conversation again the next morning. “You seemed a bit tense last night,” she commented.

“No,” I said casually, “I just wanted you to know that I am not incompetent despite the fact that I don’t ask you a lot of questions.”

She paused; then said, “I hope you’re passionate about the things you’re working on.”

I just stared at her, unsure how to respond.

“Are you passionate about IT?” she asked.

I am not a lier, but I also wanted to give as diplomatic an answer as possible. “I wouldn’t say that I am passionate about IT, but I still want to do a good job at what I do.”

“What can we do to make you passionate about IT?” She seemed to believe that was possible, just because she’s a freak of nature who actually gets off on this stuff.

“I don’t know that I’m wired to get excited about IT contracts, but that doesn’t mean I won’t deliver good work.”

“Why did you take this job?” she finally asked pointedly. She has never wanted me on her team despite the fact that – by her own admission – I do deliver.

My direct boss is the reason I took the job. I like and respect him; I’d worked for him before, and he asked me to be on his team again. But I hadn’t known at the time that I’d end up doing all of my work for this madwoman. And I couldn’t believe she would be so blunt as to ask me why I even took the job.

“Patrick. I took the job because Patrick asked me to, and I like and respect him.”

“Well,” she said with a disapproving look, “Your first year in the role is almost over. Just three more years, and you can move on.”

Is there any question as to why I am looking for a new job?

Working for a large company has taught me to expect all corporate communication to go something like this: “Blah, blah, blah… [jargon]…. [buzzword]… blah, blah, blah.”

So when I was recently tasked with heading up departmental communication (apparently I have a way with words or something), I decided to take a big risk and completely revamp our corporate communication style.

Our previous monthly email out to internal staff was the typical multi-paragraphed mumbo-jumbo of fluff talk that no one bothers to read:

So this month, I added a bunch of visuals. Not just visuals, but departmental memes. Because I am young. And hip. And hilarious. And awesome.

We have a system called SQS that was recently rolled out and is now mandatory for all staff. Instead of just saying that (because… #snoozefest), I utilized the infamous LOTR meme: 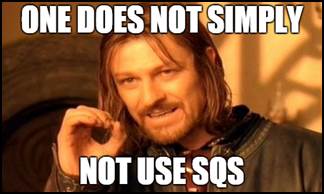 And for the roll out of our new SharePoint site (internal document sharing site), I called in Willy Wonka: 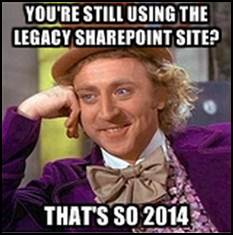 I also used both the Morpheus meme and Keep Calm meme for other portions of the staff communication. Of course, I included all of the typical buzzwords and departmental jargon, but my hope was that people might actually laugh, enjoy reading the monthly email or, at worst, be momentarily broken out of their desktop daze and the mesmerism of monotony.

As expected, I took major heat for going off the beaten path and doing something new, unique, fun and different. Heaven forbid we use visuals – or color – or humor! in our internal staff communications! How unprofessional!

Actual comments I got back:

“Are we in fifth grade?” No, but some of us believe in embracing our inner child and actually trying to have some semblance of fun at work. Since, you know, we spend a third of our lives here.

“It actually made me read the note, which is a huge plus.”

“That’s awesome. I’d read any staff communication with ‘Matrix’ and ‘Lord of the Rings’ references!”

“Good note!” — This from our new General Manager. Score!

Kyle, of the fire alarm story, comforted me with this when I got my feelings hurt about never fitting the mold at this company: “It was a good try. It’s always tough to make modern changes with an oil company. Don’t let it discourage you. You made at least one coworker laugh!”

Thanks, Kyle. At least someone appreciates my creativity and sense of humor here!