I need advice.
Read on for why
And then, perhaps, leave a reply.

I’m frustrated and feeling stuck.
Conflict and angst abound.
Should I break from dating?
There are suitors all around.

My heart still longs for Bryan,
Though my head is raging No.
And two long months have passed
Without much more than a mere hello.

Sweet Jared and the nerdy Grant,
Plus S, G2 and N,
Have all served as distractions
From loneliness rushing in.

But if I’m honest with myself,
I don’t yet see a man
I could see spending forever with
So I begin again.

Then men roll in, the men roll out,
And all I have to show
Is a long trail of broken hearts
And more baggage to tow.

Who gets your vote:
Bryan or the still-elusive Flynn?
Should I give a shot to Jared
Or to Nick the Strict again?

Or has the time come for this Bloggess
To accept her lot
As the first date everybody wants;
Then the girlfriend they forgot?

I wish I’d found a remedy;
A way to dull the pain
Apart from dating four at once
To feel desirable again.

I know Jesus in the answer,
But He feels so far away.
And I know His timing’s perfect
But sometimes it’s hard to wait.

I think Bryan’s what I want
But maybe Jared’s what I need.
Bryan’s exciting; Jared’s kind…
But kind of boring. Would I mind?

Okay, dear readers. Share your thoughts,
But kind like Jared be.
I welcome your opinions
As I lay bare my heart for all to see. 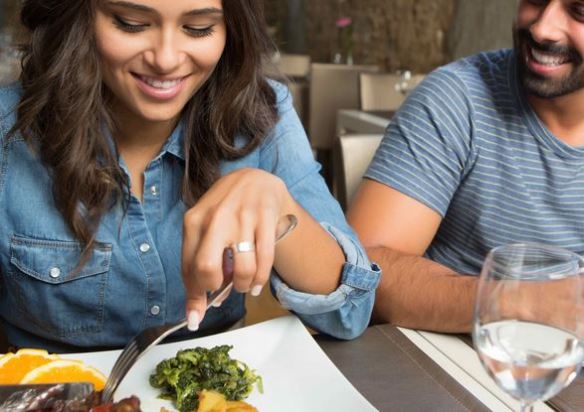 I ran into Flynn at the office today. And last week. And the week before. We’ve been seeing each other a lot, completely unplanned and unanticipated.

Last week, I walked with Jo Ann to pick up her diaper bag from our on-site lactation room, and we bumped into him while waiting in line to walk through the building’s revolving doors. As I have recently befriended Patricia, Flynn’s ex who was his girlfriend during our period of mutual interest, my feelings for him have faded somewhat, but my stomach still flip-flopped when I saw him in the office cafeteria this afternoon. He had already spotted me and was watching my winding path through the tables as I walked with my tray.

I was supposed to meet Jo Ann and Farah for lunch, but I didn’t see them yet, so I made my way toward Flynn, who was sitting alone for once. “You’re eating alone?!” I asked in a teasing voice as I got closer. He is normally a social butterfly.

He shrugged with a smile, “I have no friends!”

I raised an eyebrow. “I know that’s not true. I’m waiting for some girlfriends. Can I keep you company until they show up?”

“Sure, pull up a chair!” he gestured to the empty seat beside him.

“So how’s your lady friend?” I asked as I sat down, referencing the full-figured blonde I’ve seen in his Facebook photos lately. I wanted him to know that my joining him was not an attempt to pick him up; I knew he was taken.

“I don’t have one,” he said between bites of sandwich.

My surprise showed on my face. “What about that girl in all of your pictures?”

“Oh, you mean Josie?” He waved his hand and made an it’s-no-big-deal face. “We broke up. It was never really anything serious.”

“Oh… so who’s next on the docket?” I asked without missing a beat. Flynn is never without a girlfriend for long.

“I’m looking at her,” he said with a devilish grin that instantly changed into an embarrassed smile. “Sorry–”

“You’re such a player!” I laughed, making light of the comment. He hasn’t changed a bit.

We just looked at each other for a moment; then I added, “It might be good for you to have a season of singleness. You tend to go from one relationship right into another.”

“I know,” he said, head down. His expression told me that he really did know. “I don’t know how to be single. I tend to go from one intense relationship to another. It would be nice to have something casual and low-pressure. That’s what Josie was supposed to be, but she got really intense really fast. She was asking all of these questions…” he paused; then went on, “That’s actually why I backed off from you after Patricia.”

He grinned in fond recollection. “We would have gone on one date and been done.” And by the way he raised one eyebrow with the word done, I could tell that he meant we had ridiculous chemistry and would have mutually gone off the deep end in utter infatuation and intensity if we had even gone on one date together.

“I know.” I smiled back at him. There was a natural break in the conversation, so I pushed back from the table and said, “Well, I’d better go find those girls I’m supposed to be lunching with.”

I just laughed. “See you later.”

When I got back to my desk half an hour later, I had a text message from Flynn:

“So if you think we can curb the intensity for one night, you want to be my date tonight to Newsies?”

I would love to see that musical, and I would love to be Flynn’s date, but I already have a date planned tonight with Jared. He’s making me dinner at his place; then he wants to snuggle and watch a movie.

“Ha! I think we can try to curb the intensity! …but I already have plans tonight. That said, if you ever find yourself in need of a +1, I’m game.”

I wanted him to know I wasn’t completely uninterested, but I also wasn’t about to cancel on Jared.

I could see the “…” indicating Flynn was typing a reply; then he stopped and erased it. Then the “…” started again; then stopped. Finally he simply wrote, “Duly noted!”

It’s probably for the best that we’re not going out. It wouldn’t be very good for my budding friendship with Patricia. Also… we could probably both do with a season of singleness.

I keep thinking that I should take a break from dating. It’s been a hell of a year, and my heart needs a rest from the angst, stress and trauma of dating. It’s exhausting.

People tell me all the time, “You’re young! You’ve got time! Don’t be anxious about your singleness!” They don’t realize that I’m not anxious about my singleness. I’m not worried about getting married. I actually enjoy seasons of singleness, and I do hope to one day be married. The part that gives me angst is the season of dating. If there are no men in my life, great! If I’m married to my soul mate, great! But this in between gray area of I’m-not-sure-what-we-are-but-you’re-cute makes me break out in proverbial hives.

Do I like him? Does he like me? Do I like him more than he likes me? Are we exclusive? Is he seeing other people? Is he comparing me to his ex-girlfriend? Should I call him or wait for him to call me? Should I offer to pay? Is he going to kiss me? Should I dress up or dress down? When will I see him next? Do I want to see him again? Is this headed toward marriage, or is this just a fling?

Since my broken engagement last summer, I’ve been on dates with John, Nick, David, Jonathan, Victor, Philip, Flynn, Bryan and several others I didn’t blog about because either we only saw each other once or the dates were too bland to be notable. In December, I started to filter out unsuitable candidates in favor of Flynn and Bryan. By January, Bryan had earned himself exclusive dating rights (not that he ever claimed them).

After breaking up with Bryan in April, I seriously considered taking some time to sit back and re-evaluate my life – not just my love life. It’s been a whirlwind for as long as I can remember, and I tend to do well in long seasons of singleness. I’ve had multiple three-year stints of singleness that were some of the happiest stretches of my life. But the men just keep coming.

I’m not even seeking them out. Old eHarmony matches have come out of the woodwork, new guys have asked me out at church, and one guy even asked for my number at the retreat in front of my ex-fiance. Classic.

Over the past couple of weeks, I’ve had flowers sent to my apartment by one suitor and to my office by another. I’ve been taken golfing and have been escorted to the symphony. And these are just some of the messages I have received by would-be boyfriends: 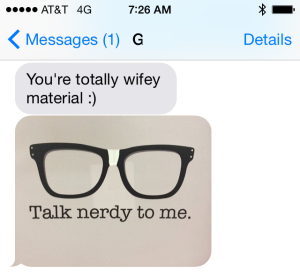 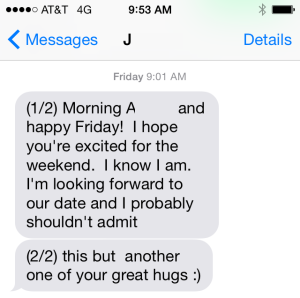 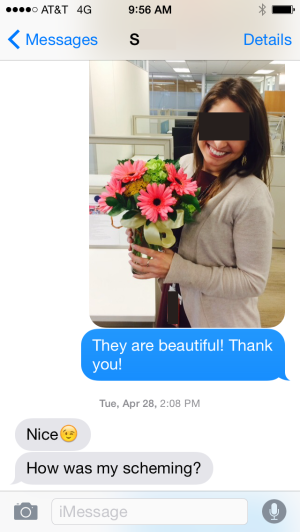 Some of them are very sweet and affectionate, which is refreshing after Bryan, but none of them are clear winners. K is a very negative person, N does not share my faith, S has zero emotional intelligence, P is anti-vaccinations, G1 is deep in debt, and I know G2 to be a player. The only one with any potential is J, and we just went on our first date this past weekend.

I am still hearing from Bryan, too. He called me from London on Saturday and asked me to join him in Spain for two weeks come September.

I told him that I don’t have much vacation left. He told me life is too short not to be spontaneous, and besides, I’m probably leaving this job soon anyway.

I told him that I can’t handle more than one week with him at a time. He told me that he recalls things got a lot better (*wink, wink) after the first week of our sailing trip. He has a point… but of course I didn’t let him know that.

Again, I state:  Dating is exhausting.