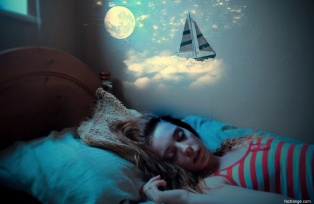 Most nights I sleep soundly, my consciousness wrapped snugly in the velvety blackness of slumber, not to wake until the gentle rays of morning light permeate my eyelids and my lashes flutter open to greet the day.

But I’m not stressed at all.

Around midnight, I jerked awake an instant before my rental car slammed into the back of the vehicle in front of me.

A few hours later, my dreams transported me back to my childhood bathroom, where I kept trying to apply deodorant, but there was none left in the stick. I looked down to the floor, and there was the remainder of the deodorant, having fallen out of the tube.

Then, around 4am, I tore myself from sleep to escape the nightmare of being late to school. Because that’s a totally reasonable nightmare for a nearly-30 working professional to have.

According to DreamsCloud, I am apparently in emotional distress and feeling loss of control because a plan or project is facing unforeseen obstacles (my career), as well as feeling growing distance to my family (parents are now grandparents; brothers are engrossed in married lives), and I sense an inability to deliver on the tasks ahead of me and subsequent evaluations and judgments of my worth (upcoming interview).

No big deal. Just another day in the life of…