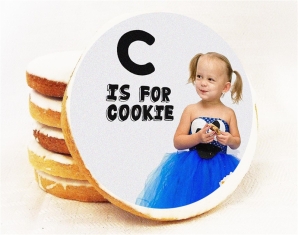 Celebrating my 30th birthday with my family last Sunday night – and also celebrating my soon-to-be-announced resignation from my current employer – my dad told a story of one of his old colleagues who, twenty years ago when this colleague was laid off, brought in cookies that his wife had baked and shared them with the office as a token of goodwill. His graciousness was so striking that my dad still remembers his actions two decades later. And Dad suggested that I do the same. “It makes quite a statement.”

For my family birthday celebration, my mom had made sugar cookies with my face and “Nerdy Thirty” screen printed on them in edible icing. There were a couple dozen cookies left over at the end of the party, so she suggested I take them into work. So that very next day – the day I resigned – I took in cookies of my face for everyone to eat.

On the elevator ride up to the 21st floor of the skyscraper where I work, six other people crowded in and kept eyeing the container of cookies in my arms. Finally, one older man broke the silence, leaning in to peer at the cookies. “Where’s the photo of my face?” He grinned at me.

He was trying to be funny, but it came off as more awkward than anything else, so I just fake laughed and tried not to look too uncomfortable. Someone else jumped in and asked, “Is that a photo of the girl who turned 30?”

It was a good likeness of me, so I was surprised at the question, but I nodded in confirmation. “Yep. It’s me. Yesterday was my 30th birthday.”

Instead of a chorus of “Happy Birthday!” from all the strangers in the elevator (emphasis on “strange”), I was surrounded by shifting eyes and uncomfortable silence. Confused at the response, I realized they must have thought I made cookies for myself and brought them into the office in order to celebrate myself. It was a Monday morning, so someone more perceptive would probably have realized they were left over from a weekend party, and I didn’t feel like making the effort to correct their thinking, so we all finished the elevator ride up in awkward silence before – ding! – the elevator stopped on 21, and I gratefully got out.

Hours later, I stopped by the kitchen area and found one of my colleagues picking up one of my “Nerdy Thirty” cookies. Striking up conversation, I asked, “So what do you think? Is it a good likeness?” I smiled at him, tilting my head for effect.

Instead of thanking me for the cookie, or wishing me a happy birthday, or even commenting on how great the cookies looked, he glanced at the now half-eaten photo of my face and mumbled, “Is it supposed to be you?” He bit again into the cookie, shrugging and turning away to refill his water bottle. “I guess kinda,” he shrugged again. There was no excitement, no congratulations – either on my birthday or my resignation – no comment of “what cool personalized cookies!”

I shouldn’t have been surprised, but I was astonished at how thoughtless, awkward and utterly self-focused everyone around me seems to be. When my boss was only focused about how my resignation inconvenienced her; when both strangers and colleagues were just interested in eating a cookie and not thanking or congratulating me; when I saw the types of responses I received from my farewell note – all of these stand as reminders of how completely selfish people are, unconcerned with the affairs of others except as it impacts them.

I sent out a heartfelt note to all of my friends, colleagues and stakeholders, recalling fond memories, focusing only on the positives of the past eight years and thanking them for their support, encouragement and collaboration. This is one of the actual responses I got back: 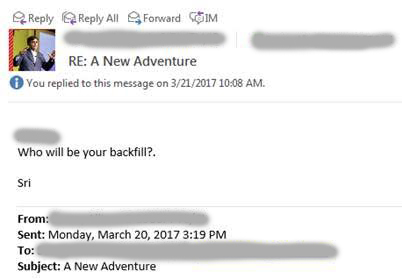 Total lack of social skills and a punctuation error? You’d think I work with a bunch of engineers or something.