I used to walk around the office with a Resting B Face so that people would find me less approachable. There are few sufferings more torturous than listening to a coworker prattle on about their latest invoicing issue.

Then I got coaching that I needed to soften my Grumpy image. I went through a painful phase where I tried actually smiling at people, but I recently discovered an effective new tool in avoiding human interaction: Pretending to be Sleepy (and no, I don’t mean the dwarf, although that would probably be an effective tactic, too. I doubt anyone would willingly approach an adult wearing a Seven Dwarfs costume).

Putting on the non-Seven-Dwarfs costume of Sleepiness is a rather natural disguise to wear early in the morning. When you get into the elevator to go up to your office during the week, just close your eyes as though trying to catch a few more seconds of Zzzzs. Furrowing your brow just slightly will also cause any observers to believe that you had a rough night and just need some peace and quiet. Whether or not you’ve had a rough night, peace and quiet you will get.

Once you arrive at your desk, ensure to move very slowly and methodically, putting down your bags and settling into your chair. Keep your eyelids droopy and your expression placid. Repeating this routine for a few weeks will allow coworkers to think you’re not a morning person. This is a winning strategy for those of us who actually are morning people but just don’t like to share our morning quiet time with other human beings.

When you are walking the hallways to the bathroom or kitchen area, you will inevitably encounter coworkers who will want to talk to you (or talk AT you… about their kids, their gardening, their weekend, the latest football game, etc). Keep that dull expression on your face and blink lazily every few seconds.

When they very predictably ask if you’re alright, inform them that you haven’t had your coffee yet. Whether or not you are a coffee drinker, this magical statement pulls at the heartstrings of everyone in corporate America and will earn you a knowing nod as well as the pleasure of seeing your coworker walk away. 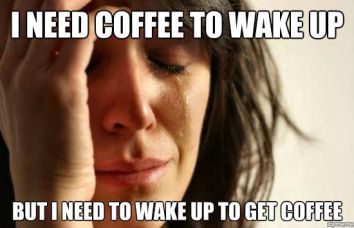 As the day moves into the afternoon, substitute your “sleepy” look for a more “tired” look. When forced into conversation, make comments like, “It’s been a long day.” Exude low energy and no one will want to be around you.

Ladies, this is the moment to try pulling off that “grunge look.” It’s the totally fashion forward way to ensure that everyone leaves you alone. Succeed in your K.Stew impersonation, and peace and quiet will finally be yours.

That has been my reality for the past year. I had hoped that 2015 would provide more stability than 2014, but that just hasn’t been the case.

In January, I was in a car wreck and spent six weeks trying to get my car repaired and work out payment from insurance.

In February, I bought a new car and started a new job with a new team in a new office across town. I’m still getting used to the extra hour added to my commute.

In March, I joined a new church, turned another year older, and spent half the month living out of a suitcase.

In April, I ended a six-month relationship and was offered a contract to pursue a career in acting.

In May, the emotional upheaval continued when I ran into my ex-fiance for the first time since the week of our wedding; then went on dates with 20973143.5 new suitors, while continuing to receive weekly calls from Bryan.

In June, I will be moving to a new apartment across town and spending another two weeks living out of a suitcase.

Maybe that doesn’t sound like a lot. No one is dying, and I have a great support system. But it feels like a lot. Don’t get me wrong; I have a great life. Some of these changes were wonderful blessings, and change can be a great thing. But I am so ready for life to settle down. I know I’m in my twenties and should be young and full of exuberance, but I am TIRED. In every way – physically, mentally, emotionally and spiritually – I am worn out.

I am no longer coaching math or teaching Sunday school – I recently stepped down from those roles – and my graphic design classes end in two weeks, so I should have a lot more free time to recharge soon. I have a family reunion later in May and a trip to London planned in June, but once July hits, I’m hoping that I will finally be able to REST.

I can’t give what I don’t have, and if I don’t take the time to recharge, I won’t have any emotional energy to give to my friends and family, the kids I serve, the boss I respect, or the man I love… assuming he enters the picture at some point. So I’m going to rest.