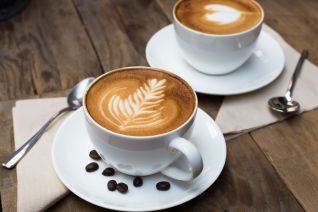 And when the two come together for an afternoon of pure, unexpected awesomeness.

For about a month now, I have been coaching a junior high Math Club. Every Thursday afternoon, I leave work a little bit early to drive to a local middle school and teach Number Sense (competitive mental math) to about a dozen 7th and 8th graders.

Yes, I was a nerdy Mathlete once upon a time, spending my Saturdays at math competitions. Fortunately for American society, I now teach other young, impressionable children to be equally as nerdy. Luckily for these kids, some brilliant fashionista coined the term “hipster” so they have a chance to be cool while being smart. I cannot say I was so fortunate back in my day.

On the week I started this volunteer work, I allowed a lot of extra time for traffic, not knowing how long it would take me to drive across town. I ended up arriving almost an hour early, so I stopped by a neighboring Starbucks to kill some time while I waited for the after school program to start.

As I climbed out of my car – still in my business suit – and walked up to the door of Starbucks, some teenagers dressed in all black with punk accessories started to catcall me. One in particular, with sunken eyes and an untamed mass of curls, called out, “Hey lady, will you buy me a drink?”

I looked him up and down and asked why I should do that. He said, “Because it’s freezing out here!”

It’s true that it was cold outside, but when I asked, “Why don’t you go inside then?”, he looked dumbfounded for a second; then replied with sass, “I’m so cold, I’m frozen in place!”

I lifted my chin and told him, “Then you’re not smart enough to earn yourself a drink.”

I walked inside, got in line to order, and had a crazy thought. I am an engineer, not a teacher, and it would be nice to run through my lesson plan with a practice audience. The punk kids outside all wanted coffee (and obviously needed some positive adult attention), so I got out of line before I could over think the wild idea.

I popped my head outside and called to the dozen teenagers skulking about, “Hey, anybody who wants a free coffee, come with me! If you are willing to sit and listen to fifteen minutes’ worth of a math lesson, I’ll buy you a drink!”

The curly-haired boy who had asked me for a hot drink only moments earlier gaped at me with wide eyes, astonished. “Are you serious?”

“I sure am. Are you coming?” I held the door open for him as he walked in, along with five of his friends.

They had been angry, aggressive kids outside, wrapped in their claimed misunderstood status, but once in line with me, the transformation in their collective demeanor was astounding. They were all suddenly shy, polite, and sweet.

Every single teen, when he or she got to the front of the line, looked up at me with big eyes and asked shyly, “Does it matter what size I get?” I loved that they asked, and I loved that I could tell them, “Get whatever you want. It’s my treat.”

After the last kid had ordered, and I paid for their drinks along with my tall cafe mocha (with whip, of course), the cashier asked me skeptically, “Is this some kind of community outreach program?”

I laughed, “Nope. This is just me loving on some kids and practicing my math lesson.”

The woman raised her eyebrows and pursed her lips, looking scornfully at the teens behind me. “Well you treat them better than we do.” These kids must be the bane of her existence, always hanging around outside the store, seemingly up to no good.

Once all of the teens were settled with their inevitably Venti-sized drinks in their hands, I started the lesson. I walked them through LIOF and the Rule of 11, first explaining how each mental math trick worked; then talking through examples. I let the kids pick the numbers we used, getting them involved in the exercises. And then I made each of them solve a problem on their own in front of the group.

When my fifteen minutes were almost up, I turned to the curly-haired boy and said, “Okay, you’re the last one. Time to do your sample problem.”

“No, I went at the beginning,” he told me, straight-faced.

“No he didn’t!” said the lone girl in the group. “Remember? I went first!”

I raised my eyebrows at the boy and said with a tease in my voice. “This is a Lie-Free Zone. Did you already solve an example for the group?”

We worked through the problem together, with the other kids surprisingly giving him encouraging comments as he thought through the answer. When he solved the math problem, his eyes lit up. He was so proud of himself that I had to blink quickly to hide the tears welling up in my eyes.

It was an absolute joy to watch the lightbulbs go off in the eyes of these teens; to watch their confidence build over the course of just fifteen minutes. I loved hearing them encourage one another and get excited about learning something new – about math, of all things!

Before long, I had to leave to teach the kids actually involved in Math Club. But I’ve gotta admit, teaching the hoodlums was way more fun. I have been looking for a place to actively volunteer for five years, but organizational bureaucracy or stringent scheduling always has gotten in the way. Maybe I finally found my niche. Maybe it’s time I just start going to different Starbucks and picking out juvenile delinquents to invest in. Math for Mochas. It’s got a nice ring to it.