I just discovered that secret cosplay is a thing.

I mean, I already knew it was a thing – I was secretly dressing up as Rinoa and other Final Fantasy characters in high school – but I didn’t know there was a name for it.

For the uninitiated, cosplay is short for “costume play” and essentially means to dress up like your favorite characters, often from video games or other sci-fi media. Secret cosplay, then, is dressing up in normal clothes that happen to closely resemble the attire of your favorite characters. For example, these are the types of outfit I would occasionally wear to class in high school: 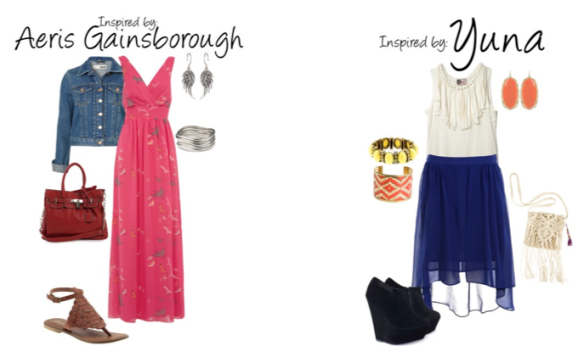 They look like perfectly normal outfits until you see them next to images of the characters Aeris from the game FFVII and Yuna from FFX, respectively:

There was a rush that came from knowing I was undercover in the middle of my high school. I felt like such a rebel, wearing a “costume” to school. Clearly I didn’t get out much.

It was also kind of fun when people recognized the outfits as the correlated character, especially because, in order to call me out, they had to reveal their own nerdiness. One time my friend (and crush) Matt pulled me aside after English class and asked under his breath, “Is that a Rinoa outfit?”

Yes… Yes, it is, you clever man. And the position of Squall Leonhart is still available.